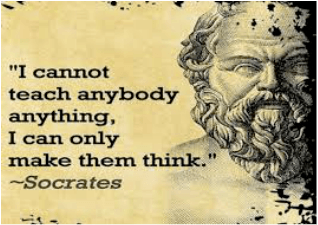 -Platonic Academy in Athens, Greece Prior to 86 BC-

Have you figured it out?

Of course, you have…

Those Athenian primo Philosophers like Socrates, Plato, and Aristotle, they had it figured pretty well: don’t tell people anything! Just engage them in dialogue until someone comes up with a ‘philosophical gem’ that sounds universal and valid…and, it didn’t hurt that ‘SP&A’ walked around in funny long-loose clothes and sandals – maybe, even barefooted – definitely too lazy to shave, and spoke with erudite voices that guaranteed they had some scintillating and earth-shaking knowledge likely already known but wanted their listeners to author the answers.

Having read about these ‘Genius Three’ in college and even now occasionally – just, not too long because they give me a ‘hillbilly headache’, trying to understand the ‘Socratic Method’, ‘Plato’s Republic’, and ‘Aristotelian Logic’. There is one thing for sure, these hard-thinking men devoted their lives to the pursuit of knowledge, and Socrates committed suicide by drinking some hemlock potion…it was either that or ‘exile’, and he took his honorable way. The Athens legal authorities claimed Socrates had corrupted the Grecian youth. Socrates’ best student was there with him at death – another young Athenian scholar and friend, Plato.

Plato would go on to ‘dialogue’ a lot with Aristotle and other giant scholars of that ‘Classic Era’. Plato would also establish The Academy’ in Athens c. 387 BC. The Academy persisted throughout the Hellenistic period as a skeptical school, until coming to an end after the death of Philo of Larissa in 83 BC. The Platonic Academy was destroyed by the Roman dictator Sulla in 86 BC.

Now, sure, you can find all of this on your own, but I had to show off just a bit…and I’m not quite finished yet…

In refreshing my mind a bit on these three great Philosophers who have adorned college textbooks for centuries now, I should not have been surprised – but, I was – to find out that these Greek giants, particularly, Socrates, thought  Democracies were not the best governing blueprint, particularly, if the wrong people were working at the power desks. Plato, perhaps more than Socrates, was not a ‘democracy’ advocate. Each believed that too many variables existed in a Democracy – favors, paybacks, ‘big money’, ignorance leading to ‘Mob Rule’. It is also true that within any system of governance, there is potential for some semblance of disaster.

After so few paragraphs, my brain power is used up, and I will end by saying a definite NO to Democratic Socialism, NO to ‘Open borders’,  NO to de-funding our ‘Law and Order’ people, NO to higher taxes, NO to the SWAMP GROUPS that rob us blind, YES to a strong Military, YES to Charter Schools and Educational Reforms with too many promising programs thrown aside, YES to a proven leader for President who has had some remarkable achievements during his first four years in the oval office, and YES to Innovative solutions to state and local government.

Okay, like it, do not like it, ignore it, but the man who wrote this post is  taking a nap…writing, taking naps, that’s what old guys do!!!